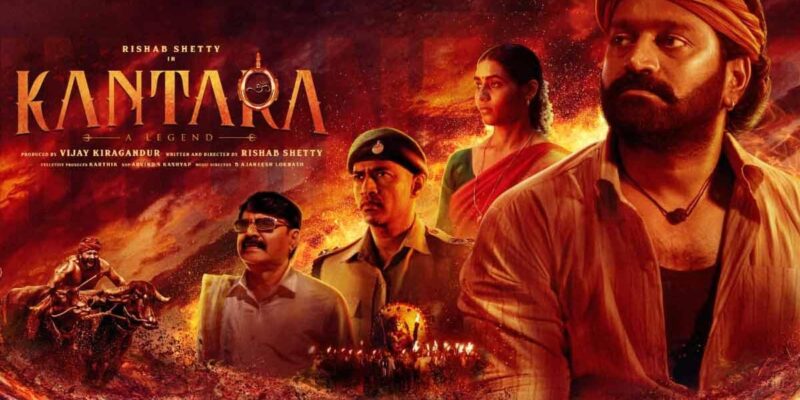 Kantara Movie Controversy: All You Need To Know

Kerala: The Kozhikode District court, on Saturday, December 3, 2022, denied the Thaikudam Bridge band’s plea for lack of jurisdiction. This further means that the ban decision is no longer in effect. The Thaikudam Bridge band is really disappointed since they were convinced they would prevail after the injunction ruling. The Kantara movie controversy happened because the band petitioned against the Varaha Roopam song in the movie.

What Is The Movie All About?

Kantara is a fictional tale, which spans almost two centuries, and is motivated by the connection that exists between forests and people. In 1847, a king traveled in search of tranquillity and miraculously discovered it in the form of Panjurli, a heavenly ghost that guards the forest and its creatures.

He then asks the forest residents to grant Panjurli permission to return home with him and gives them ownership of the forest areas in return. The movie further highlights the Bhoota Kola ritual, which has emerged as one of the controversies in the movie.

Kantara: Amid Controversy Since The Beginning

The Kannada movie Kantara, which premiered on September 30, has received favorable reviews ever since and now has the top rating among any Indian film on IMDB. It has been translated into Hindi, Tamil, Telugu, and Malayalam and stars Kannada actor and filmmaker Rishab Shetty.

The movie is succeeding in the marketplace and is very close to generating Rs 200 crores. But, at the same time, the film has been in controversy for multiple reasons. The audience has questioned the song “Varaha Roopam” and the practice of “bhoota kola” in the movie, which led to the Kantara movie controversy.

What Was The Kantara Movie Controversy All About?

Thaikkudam Bridge, a band from Kerala, alleged on Instagram on October 24, 2022, that the creators of Kantara had stolen their song. Three days later, they filed a lawsuit against the Kozhikode District Court, claiming that the song Varaha Roopam plagiarised their 2015 song Navarasam.

After the controversy, Kantara’s creators insisted that the songs appeared similar because they employed similar ragas. Still, the band declined to accept the claim, claiming that the song was completely plagiarised. Afterward, Thaikkudam Bridge mentioned their allegations in litigation at the Kozhikode Principal District and Sessions Court.

On October 28, 2022, the Kozhikode court issued an injunction prohibiting the Varaha Roopam song from being played. According to the injunction, the music couldn’t be played anywhere without Thaikkudam Bridge’s consent.

The copyright for the Navarasam song, which is owned by Mathrubhumi Printing and Publishing Company Ltd, was infringed upon. And, on November 2, the Palakkad Court issued an ad-interim injunction order.

Now, Varaha Roopam, Kantara’s most well-known and beloved song, is now formally included in the movie. The music is currently available for fans to enjoy despite the argument. Since its debut, the song Varaha Roopam has become a favorite among listeners.

The Kannada movie Kantara, which has become one of this year’s biggest hits, centers on a mythical battle between humanity and nature. It also features the ancient ritual dance performance “Bhoota Kola.” During that ritual, the villagers worship native spirits or deities.

The depiction of the Bhoota Kola ritual enraged some people, who caused another Kantara movie controversy. Actor and activist Chetan received numerous objections in Karnataka regarding his comments on a cultural practice seen in the movie.

On Saturday, October 22, 2022, the Bengaluru police filed a suit against him under section 505 (2) of the Indian Penal Code. Shiva Kumar, the Bajrang Dal convenor for Bengaluru North, reported the incident to the police.