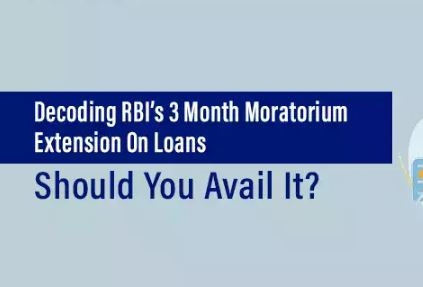 How beneficial is the three-month moratorium provided by the Indian banks?

The Indian moneylenders, majorly the private and public banks and non-bank entities, have relaxed the Equated Monthly Installments (EMI’s), interests and loan repayments by offering a moratorium period of 3 (three) months. i.e., from 1st March – 31st May, for the borrowers who have been hit by the unprecedented global virus, alternately declared as a Pandemic by the World Health Organization. Precisely, this was declared when on 27 March 2020, the Reserve Bank of India (RBI) permitted to discontinuation of the collection of EMI on the term loan outstanding as of 1st March 2020. To understand whether this three-month moratorium will actually be beneficial or not, we must first understand the technical aspects.

The term loans include all standard loans like home loan, vehicle loan, personal loans or other credits which have a fixed duration. But, the grace period provided by the banks in which the borrowers have the option to not pay the EMI shall not be presumed to have been waived off. Also, the residual tenure shall be shifted by 3 (three) months.

1. The EMI that is relaxed during the moratorium period shall be added to the Principal amount.

2. Also, the interest shall continue to accrue on the unsettled portion of the loan under the moratorium period.

The borrowers have been provided with three preferences by the lenders:

1. Option I: The borrower can make a one-time payment in the month of June of the interest that accrues in March, April, and May.

2. Option II: The interest is added to the outstanding loan, which will eventually increase the EMI for the remaining months.

3. Option III: The EMI is kept unaffected, but the loan tenure is extended. The number of additional EMIs will depend on the age of the loan.

This will increase the burden of the loan on the borrower later. It is advisable that a borrower shall opt for this option only if there is a loss of income due to the outbreak of this virus; otherwise, it will greatly affect the repayment plan. The borrower will have to face the repercussions of this scheme after 3 three months. The analysis of this Three-Month Moratorium scheme shall be explained through a table and an illustration.

In this formula, the variables stand for:

EMI is the equated monthly installment

R is the rate of interest that is levied on the loan amount (the interest rate should be a monthly rate).

*Extended tenure does not include the 3 months

The above numerals are subject to change with respect to the kind of loan, the principal amount, the rate of interest, the tenure of repayment, etc.

Evidently, the longer the residual year, the greater the borrower is affected by the scheme. Since the interest gradually comes down. People with older loans having 5-10 years left for repayment, will not face much difficulty compared to someone having a new loan taken 2-3 years ago.

For convenience, various banks like IDBI and HDFC have provided a portal on their website where one can calculate the increase in the EMIs and the extension in the number of additional EMIs after 3 months if someone desires to opt for this scheme.

What happens to the accounts that are in default or have failed to pay the EMI before 1st March?

It is pertinent to note that this scheme is for 3 months currently, and the amount that is overdue on or before 29 February 2020 may lead to the down gradation of the account by April 2020. The borrower is required to pay the overdue amount to avoid down gradation. If the borrower has paid the installment for the month of March, it can discontinue the payment of the EMI for the month of April and June 2020.

The same scheme is also applicable to credit cards. The impact of deferment will be considerably larger for credit cards. Since credit cards, banks and companies charge an exorbitant interest of 36%- 42% annually. The below-mentioned table could explain how this scheme could lead to a significant loss to the borrower:

The table clarifies that if the cardholder does not pay for the 2 (two) months continuously, the interest could add up to more than 6-8%. The monthly expenses done with the credit card will also attract interest. When interest is not paid for two months as per the guidelines of the concerned banks, they could also charge interest on the interest not paid for the previous month.

Hence, it is advisable that, in this case, it will be logical to convert the overdue credit card bill into an easy EMIs of 6-24 months. The interest charged on this will be much less than the interest charged on credit cards.
Irrefutably, to avail of this scheme is not the very best idea. Nonetheless, if someone lacks physical or liquid cash in these times, this can be a temporary relief for them. Reasonably, those who have a steady income even now and have the responsibility to pay the EMI’s shall continue paying their EMI’s and not fall for Three-Month Moratorium trap.