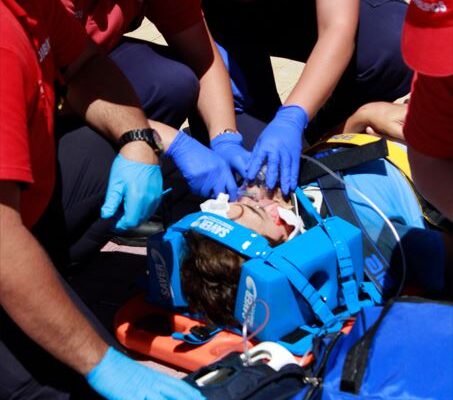 New Delhi: The Supreme Court, on Wednesday, said that the notion of compensation for future prospects of a sufferer in accident matters involving catastrophic injuries leading to lifelong disability is not justified.

According to the supreme court, deciding how much compensation to award is ultimately a complex task and will never be a precise science. It further added that perfect recompense is quite unlikely, especially in injury and disability claims.

The bench claimed that it had observed High Courts and Motor Accident Claims Tribunals taking the opposing position. According to the court, such a limited interpretation is irrational since it completely rules out the idea of the live sufferer in accident cases moving forward in life while admitting such a possibility of future prospects in the victim’s death.

It was the bench of Justice Surya Kant and Justice J.B. Pardiwala that increased the compensation granted to a person, to Rs 21,78,600, who sustained a permanent disability to the degree of 45% as a result of a road accident in July 2012 in Karnataka.

This verdict was delivered by the Supreme court on an appeal by Sidram, who submitted it against the Karnataka High Court’s April 2018 decision. In this decision, the High court increased the compensation granted by a Motor Accidents Claim Tribunal in Belgaum from Rs 3,13,800 to Rs 9,26,800.

The bench observed that from the day the case was filed to the day the payment was realized, the tribunal had given a total compensation of Rs. 6,13,00 along with 6% interest per year. The petitioner demanded a further increase in compensation for future prospects in the case, contesting the high court’s decision.

The bench stated that the supreme court generally adheres to the notion of putting the sufferer as close to the position that she or he was in prior to the accident as possible. And that is also with additional compensatory instructions for loss of utilities and other expenses.

The Idea Of “Just Compensation”

The court moved forward toward the judgment keeping the idea of just compensation for future prospects in mind. The Supreme court bench heard the case and stated that the evidence showed that the accident caused the petitioner to experience paraplegia, a type of lower-body paralysis. It also mentioned that the petitioner’s age at the time of the incident was 19 only.

Pointing to a prior ruling by the highest court, the bench stated that it was of the opinion that no documentary evidence was required to be presented in order to establish the victim’s hypothetical income and that the court might still grant it even in their absence.

The pain to be classified as non-pecuniary loss

The bench of the Supreme court stated that because the pain and suffering cannot be quantified mathematically, it would be classified as a non-pecuniary loss.

The bench cited another ruling by the highest court and instructed the insurance firm to pay the plaintiff the difference in the amount of compensation paid. This was done after observing that serious injuries frequently leave victims with severe psychological and emotional scars in addition to permanent physical constraints and disabilities.

The bench of the Supreme court also said that every time a judge is asked to decide on a compensation claim, they should always take into account the accompanying trauma of the victim having to live in a world that is completely different from the one they were born into.